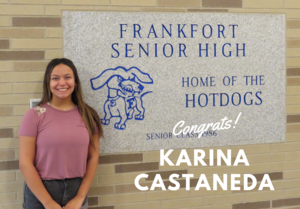 On Friday, May 21,Karina placed in the Top 20 of her Behavioral Sciences category at the International Science Fair.  This is competing against kids from all over the world (the winning project in her group was from Australia, for example).  This will help put the accolades of her project this year into some content:

At the Regional level in March (which is a 12-county area surrounding Lafayette), she won the best Behavioral Sciences project award and placed in the Top 3 of all projects in the contest.  This qualified her for the State competition.

At the State level in April, she had the second-best Behavioral Sciences project and placed in the Top 20 of all projects in the contest.  This qualified her for the International competition as a representative of Indiana.

Karina’s projects for the past 5 years have centered on the bilingual brain. She started working on this year’s project back in September.

The news of her placing in the international competition came as quite a surprise to her. “I was super excited, especially because we weren’t expecting it. Being from a small town, small state of Indiana in the United States, it was totally unexpected. So when I heard my name announced, it was very exciting!”

Karina plans to study Business Management at Purdue University in the fall. She is also hoping that she will be able to judge some of next year’s science fair projects when Purdue hosts the regional competition.

Bret Rhea, Director of High Ability at CSF said this about Karina, “She chased this dream for a long time, and now she's made it a reality, thanks to the help and support of our Frankfort school community.  What an accomplishment!”

When asked about Mr. Rhea’s influence, Karina said, “He has been my mentor through all of my science fair experiences ever since I started competing in 5th grade. He has been guiding me, not telling me what to do, but asking me what I want to do and then running with all of my ideas.”

Congratulations, Karina, on this outstanding accomplishment!! It's a great day to be a Hot Dog!