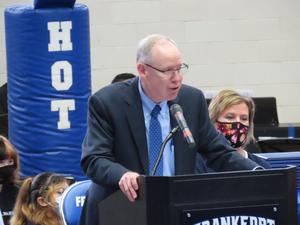 A 1983 graduate of Eastern Illinois University, Mr. McKinney began his career in education as a junior high school English teacher and coach in central Illinois where he grew up. He moved to Indiana in 1985 and taught at Benton Central Junior/Senior High School for two years before taking a teaching position in Brownsburg. He then taught at Ben Davis Junior High School in Wayne Township for 6 years before being promoted to assistant principal in the same school. He then served as a junior high principal and a high school principal for 12 years in Wayne Township Schools before coming to Frankfort. During his twelve years of teaching, Mr. McKinney coached cross-country, basketball, and track at the middle school and high school levels.

He received his Master’s degree in school administration from Indiana State University. During his 27 years as a school administrator, Mr. McKinney worked to advance research-based instructional practices, Professional Learning Communities (PLC’s), project-based learning, as well as many other initiatives to improve high school graduation rates and remove barriers to allow all students to reach their full potential.

In his letter to the Board, Mr. McKinney stated the following: “I will be forever grateful for the experience I received while serving this school corporation, for the quality professionals I had the honor of working alongside, and for the students who call the Frankfort Schools their home. Without a doubt, the greatest asset of our school corporation are these amazing students. It may be one of the best kept secrets in the state of Indiana, but those of us who have been blessed to be among them know that they are truly the best of the best.”

CSF School Board President Sandy Miller commended Mr. McKinney’s service to the schools. “It is with mixed emotions that the Board accepts Joel’s letter of retirement.  We are so excited for him as he starts this next chapter of his life.  However, his presence and leadership will be truly missed.  Joel has been a strong leader as we have navigated trying times this past year and a half.  He has not only been a champion for our students, but has always had the best interest of our staff and community at heart.  They always say you should leave a place better than you found it.  Joel leaves The Community Schools of Frankfort in better shape than he found us.  For that, and much more, we say thank you.  We wish Joel the very best in his retirement.”

McKinney said, concluding his letter, “I will always be proud to be a Hot Dog!”