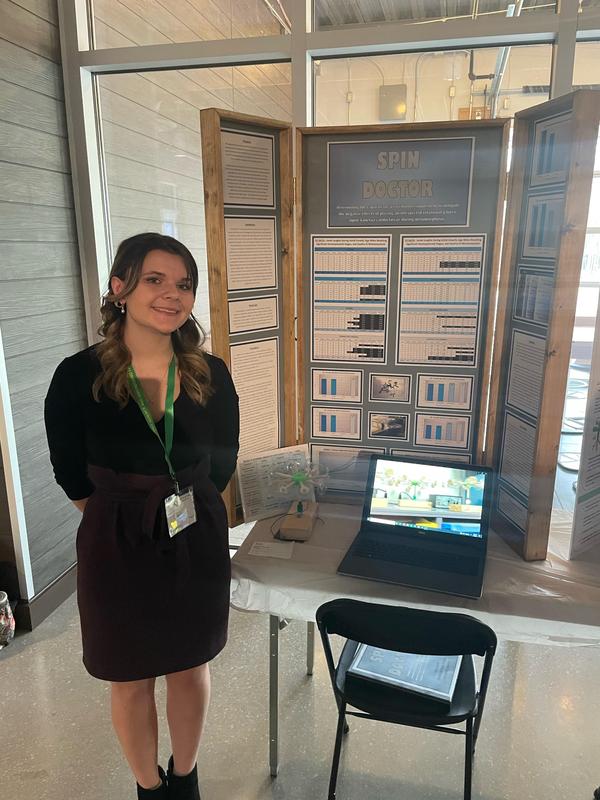 On Saturday, April 2, FHS junior Lexy Foust competed in the statewide Hoosier Science and Engineering Fair against the best high school science projects in the state.  Lexy was awarded two sponsor cash prizes for excellence: one from the US Navy Department of Research, and another from Purdue Department of Biophysics.  That alone is quite an accomplishment.

Not only was her project recognized by those prestigious institutions, Lexy was also named as one of the 12 delegates from Indiana to the International Science and Engineering Fair that takes place in May in Atlanta with students from all around the world.

“I knew my project was good, but I didn’t think it was good enough to make it that far,” Foust said. “I was just shocked.”

Lexy has been working on various aspects of the project for 3 years. Entitled “Spin Doctor,” her project focused on the circulation of butterfly cocoons related to various stimulants introduced to the caterpillars via their diet.

The achievement has been a dream for Lexy for a few years. “I always said that at least once during high school I want to make it to International.”

“She’s just an awesome presenter,” Director of High Ability Bret Rhea said of Foust. “To have not been in front of an actual judge for 3 years, I think that’s a large part of what she’s good at. She has a very comfortable style, talking about her project.”

In 2021, Karina Castenada represented FHS at the International Science and Engineering Fair. Last year’s event took place virtually as a result of the COVID-19 pandemic. Foust is very excited to be going to Atlanta in May.

“She (Foust) is the culmination of all those things that came before her,” Rhea stated. “Karina opened up the possibility that this is how it needs to be done, and we’ve kind of built on that. And Lexy will do the same thing. Whoever comes after her will have the benefit of her performance as well. She’s part of that legacy now.”

Not content to just represent FHS this year, Lexy has already stated that her goal is to make it to the International Fair again next year.

A dynasty? A legacy? One might say that. What is for certain is that everyone from Community Schools of Frankfort is extremely proud of Lexy and her accomplishments this year!